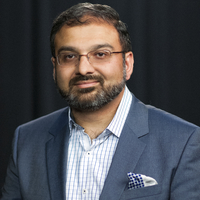 Biography
Irfan Siddiqi is a Professor in the Department of Physics at the University of California at Berkeley and a Faculty Scientist at the Lawrence Berkeley National Laboratory. Siddiqi and his research group, the Quantum Nanoelectronics Laboratory, focus on the development of advanced superconducting circuits for quantum information processing, including computation and metrology. Siddiqi founded the interdisciplinary Center for Quantum Coherent Science at Berkeley and currently directs the Advanced Quantum Testbed at LBNL. Siddiqi received his A.B. in chemistry & physics from Harvard University and Ph.D. in applied physics from Yale University. Siddiqi is the recipient of many awards, including the APS George E. Valley Prize and the Berkeley Distinguished Teaching Award.
Presentations
Focus Session
The Dawn of Superconducting Quantum Processors

Quantum Computing
Back to top