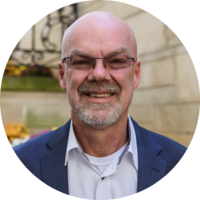 Biography
Dr. Craig A. Stewart is a leading innovator and strategist in advanced computing and cyberinfrastructure for research and development. (Cyberinfrastructure is defined as “computing systems, data storage systems, advanced instruments and data repositories, visualization environments, and people, all linked together by software and high performance networks to improve research productivity and enable breakthroughs not otherwise possible” – a definition coined by Stewart and colleagues - hdl.handle.net/2022/21589).

Since 2005 Dr. Stewart has been the Executive Director of the Indiana University Pervasive Technology Institute (IU_PTI). IU_PTI is Indiana University’s flagship organization for research and development in cyberinfrastructure, informatics, and computer science in support of science and engineering research, artistic creativity, and cybersecurity. Stewart’s personal research focus is in advanced computing architectures – particularly the optimal use and mix of high performance computing (supercomputing) and cloud computing to solve challenging problems in data analysis and simulation. Stewart is one of the top researchers in the world on the topic of return on investment in advanced cyberinfrastructure.
Stewart has been involved in advanced computing since writing Fortran-based statistical applications while completing his Ph.D. in Biology in the 1980s. From 1996 to 2017 Stewart was responsible for all aspects of IU’s supercomputer and research software services and operations. From 2005 to 2017 Stewart was Associate Dean for Research Technologies and as such was responsible for all central supercomputers, data storage systems, and visualization systems including supercomputers ranked among the top 25 fastest in the world and top-of-the-line Virtual Reality systems such as CAVEs and BARCO VR Theatres. Stewart’s group created the software needed to build the first ever distributed installation of the High Performance Storage System (HPSS). Stewart oversaw the implementation of the first 1 TeraFLOPS supercomputer owned exclusively by a single university (2001) and the first 1 PetaFLOPS supercomputer similarly university-owned (2013). Stewart has been the principal investigator for or the primary writer of grant proposals bringing more than $200M in funding to Indiana University.

Stewart was the founding PI of Jetstream, the first cloud computing system funded by the National Science Foundation for production use by the general science and engineering community of the US; it now serves thousands of researchers and students (www.jetstream-cloud.org).

In addition to his work at IU, Stewart has has been a visiting faculty member in Computer Science, University of Stuttgart, and a Fulbright Senior Scholar at the Technische Universitaet Dresden. Stewart has also worked for the National Science Foundation. Stewart has also served on advisory committees and in leadership of a number of organizations related to advanced computing, most notably leading the creation of a series of influential reports on campus bridging while chair of an NSF-affiliated taskforce. Stewart has testified before the House Science and Technology Committee.
Presentations
Focus Session
HPC and Medical Treatment: a View from the Front Lines