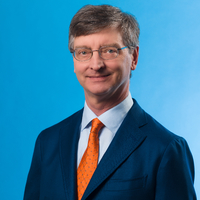 Biography
William Gropp holds the Thomas M. Siebel chair in computer science at the University of Illinois at Urbana-Champaign, is the Director and Chief Scientist of the National Center for Supercomputer Applications, and was the founding director of the Parallel Computing Institute. Prior to joining Illinois in 2007, he held positions at Argonne National Laboratory, including Associate Director for the Mathematics and Computer Science Division and Senior Computer Scientist. He is known for his work on scalable numerical algorithms and software (sharing an R&D100 award and the SIAM/ACM Prize in Computational Science and Engineering for PETSc software) and for the Message Passing Interface (sharing an R&D100 award for MPICH, the dominant high-end implementation, as well as co-authoring the leading books on MPI). For his accomplishments in parallel algorithms and programming, he received the IEEE Computer Society's Sidney Fernbach award in 2008, the SIAM-SC Career Award in 2014, and the ACM/IEEE-CS Ken Kennedy Award in 2016. He is a fellow of AAAS, ACM, IEEE, and SIAM, and is an elected member of the National Academy of Engineering. Dr. Gropp received his Ph.D in computer science from Stanford University, his M.S. in Physics from the University of Washington, and his B.S. in Mathematics from Case Western Reserve University.
Presentations
Focus Session
Practical Solutions to Programming for Performance