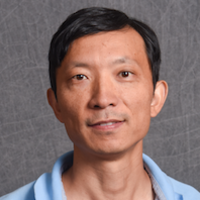 Biography
Xipeng Shen is a Professor in the Computer Science Department at North Carolina State University in USA. He is a receipt of the DOE Early Career Award, NSF CAREER Award, Google Faculty Research Award, and IBM CAS Faculty Fellow Award. He is an ACM Distinguished Member, ACM Distinguished Speaker, and a senior member of IEEE. He was honored with University Faculty Scholars Award "as an emerging academic leader who turns research into solutions to society’s most pressing issues". His primary research work lies in the field of compiler and programming systems, but features an emphasis on inter-disciplinary problems and approaches. His research has produced influential results in multicore memory performance enhancements, GPU program compilations, high-level code optimizations, and other topics in programming systems. A number of the results have been incorporated into commercial compilers (e.g., IBM XL compilers) and other products. Meanwhile, his research has led to a number of progresses in machine learning and artificial intelligence, exemplified with a set of new machine learning algorithms published at major ML or AI venues and adopted by Microsoft and other industry companies. He has served on numerous Technical Program Committees of major conferences as well as the technical advisory boards of some industry companies.

Prior to joining NC State in 2014 as a Chancellor's Faculty Excellence Program cluster hire in Data-Driven Science, Shen was the Adina Allen Term Distinguished Associate Professor in the Computer Science Department at The College of William and Mary. He spent his sabbatical at MIT, Microsoft Research, and Intel Labs between 2012 and 2013. He was an assistant professor at The College of William and Mary from 2006 to 2012. He received his Ph.D. in Computer Science from University of Rochester in 2006.
Presentations
Machine Learning Day
Accelerating Deep Learning via Adaptive Deep Reuse

AI/Machine Learning/Deep Learning
Back to top