Tags
Heterogeneous Systems
Post Moore’s Law Computing
LocationPanorama 2
DescriptionConcerns about energy-efficiency and cost are forcing the US Exascale Computing Project to reexamine system architectures, and, specifically, the memory and storage hierarchy. While memory and storage technologies have remained relatively stable for nearly two decades, new architectural features, such as deep memory hierarchies, non-volatile memory (NVM), and near-memory processing, have emerged as possible solutions. However, this era of extreme heterogeneity in memory systems will have a major impact on HPC software systems and applications. To be effective, software and applications will need to be redesigned to exploit these new capabilities. In this talk, I will sample these emerging memory technologies, discuss their architectural and software implications, and describe several new approaches to programming these systems. One such system is Papyrus (Parallel Aggregate Persistent -yru- Storage); it is a programming system that aggregates NVM from across the HPC system for use as application data structures, such as vectors and key-value stores, while providing performance portability across emerging NVM hierarchies.
Speaker 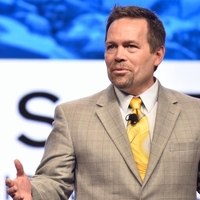