Tags
AI/Machine Learning/Deep Learning
Extreme-Scale Computing
Neuromorphic Systems
Parallel Applications
LocationPanorama 3
DescriptionNeuromorphic computing - that is, computing based upon brain-like principles - can be traced back to the pioneering work of Carver Mead in the 1980s. Academic research into neuromorphic systems has continued since then in various forms, including analog, digital and hybrid systems, primarily with the objective of improving understanding of information processing in the brain. More recently, industrial neuromorphic systems have emerged - first the IBM TrueNorth, and then the Intel Loihi - with a greater focus on practical applications. In parallel the last decade has seen an explosion of interest in less brain-like, though still brain-inspired, artificial neural networks in machine learning applications that have, for example, placed high-quality speech recognition systems into everyday consumer use. However, these artificial neural networks consume significant computer and electrical power, particularly during training, and there is strong interest in bringing these requirements down and in enabling continuous on-line learning to take place in self-contained, mobile configurations. There is a growing expectation, so far unsubstantiated by compelling evidence, that neuromorphic technologies will have a role to play in delivering these efficiency gains. The SpiNNaker (Spiking Neural Network Architecture) platform is an example of a highly flexible digital neuromorphic platform, based upon a massively-parallel configuration of small processors with a bespoke interconnect fabric designed to support the very high connectivity of biological neural nets in real-time models. Although designed primarily to support brain science, it can also be used to explore more applications-oriented research.
Speaker 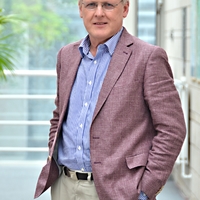 Steve Furber
Professor
The University of Manchester
Back to top